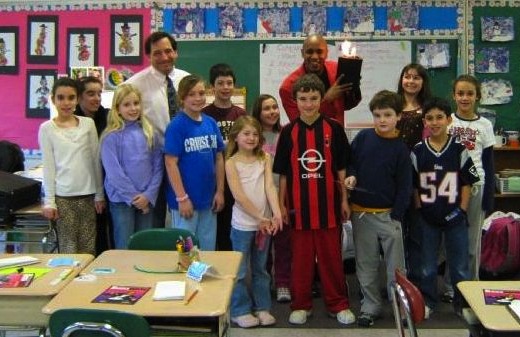 Bonaparte spoke with the Cunniff Kids News staff Feb. 6, 2008, and showed the reporters some of his magic tricks.

He says Quylar is a purple planet seven solar systems from Earth.

“Take a right at the Nebular Galaxy and it’s the first purple planet on the left,” he said.

Bonaparte is a silly magician who performs often in Massachusetts. He magically makes books and cell phones catch fire and he is teaching a magic class Wednesday afternoons at the Watertown Middle School. (The class, open to middle schoolers, will be offered again in the spring, according to the staff at Watertown Community Education.)

“I introduce magic through the principles of magic,” he said.

Covered in the class are misdirection, prop tricks, and non-prop tricks.

“You can do some magic tricks anywhere,” he said.

Bonaparte grew up in Washington, D.C. When he was 5 or 6 he decided he wanted to be a lawyer and go to Harvard University. Around that time, he started to practice magic. He lived up to his goals and became a government major at Harvard. But he thought being a magician was more fun than a boring, old government job.

Bonaparte is a very busy. He performs at Children’s Hospital in Boston seven or eight times a month, as well as at birthday parties and bar mitzvahs.

He said he doesn’t have a favorite trick.

He performs card tricks and reads minds. He also uses a dove named Snow and a bunny named Frisky that he says are from Limboland.

Bonaparte is good at magic – and loves doing it – but he has one important lesson for all future magicians.

“Some people think that if you’ve been shown the secret of a trick, they think that they can just do it,’’ he said, “but they really need to practice.’’

(To learn more about Bonaparte, go to www.bonapartemagic.com)