One voice, many roles

Scott Wahle is not just a news reporter 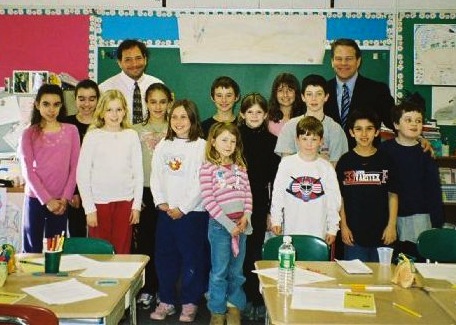 WBZ-TV's Scott Wahle shared some tricks of the trade when he spoke withe the Cunniff Kids News staff on Jan. 23, 2008.

Scott Wahle is not just a news reporter.

Wahle, the co-anchor of the “TV 38 News at 9”, also performs in musicals. Wahle has performed the leads in four musicals with the Reagle Players in Waltham: “1776”, “Fiddler on the Roof”, “The Will Rogers Follies”, and “The Music Man.”

“That’s a real neat thing when you have that instant response,” said Wahle, who grew up in the Boston area. “My passion is theater.”

Wahle came to WBZ-TV in 1989 after six years in Detroit. He has also covered the NHL, worked on ESPN’s “Sportscenter,” and done the morning news. Although he has done many jobs, sometimes when he’s on the air he can get a bit nervous. So he has a trick.

“When I first started I got nervous, and then somebody told me to picture the camera lens as my mom,” said Wahle, who has four kids, including a fourth-grader.

After all the things he has done, there is one that he likes best.

“My favorite job is being a dad,” he said.