Getting a big kick out of a soccer hero 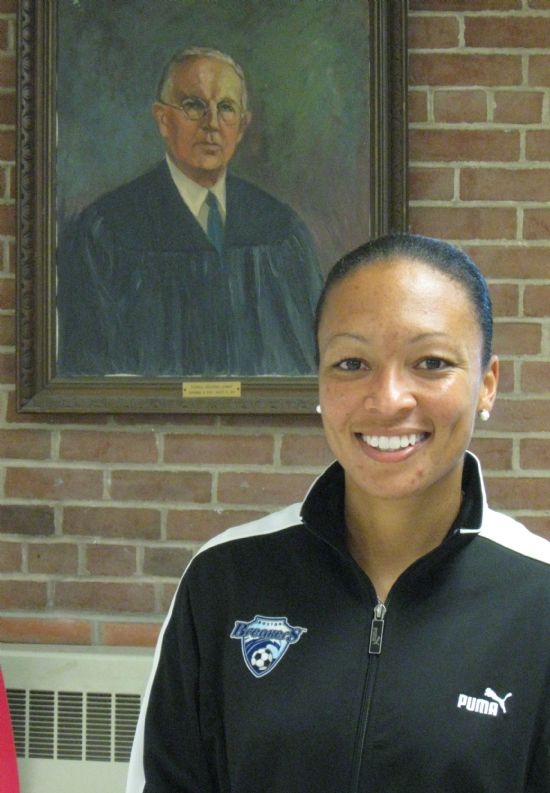 All eyes of the Cunniff School were on Angela Hucles of the Boston Breakers and the US Women's Soccer team when the two-time gold-medal winner came to the Watertown elementary school for a press conference with the Cunniff Kids News on June 12, 2009.

[Angela Hucles is a winner of two gold medals with the US Women’s Soccer team and a member of the Boston Breakers of the new Women’s Professional Soccer league. Angela came to the Cunniff School on June 12, 2009, to meet the staff of the Cunniff Kids News and answer a few questions. The following is an edited transcript of that press conference. — CKN]

Cunniff Kids News: How long have you been playing soccer?

CKN: What position do you play?

Angela: I play midfield and sometimes I play forward.

CKN: When did you start playing soccer?

CKN: What team do you play for?

Angela: I play for the Boston Breakers. We play over at Harvard Stadium. We actually have a game Sunday night at 6 p.m. if you guys want to come watch. I also play for the United States national team.

Angela: Let’s see, I like playing either midfield or forward, so I can play both defense and also offense.

Angela: My favorite sport beside soccer would probably be either basketball or golf.

CKN: Are you going to a soccer game [AC Milan vs. Iner Milan] at Gillette Stadium on July 26?

Angela: I would love to go. I’m not sure, I don’t have tickets yet. Are you going to go? You already have tickets? Maybe I’ll see you there, it’ll be fun.

CKN: What number are you

CKN: You’ve traveled a lot. What was your favorite place to play?

CKN: Do you teach children?

Angela: I do. Sometimes I do soccer coaching, either for smaller teams or sometimes individual lessons. I coach all ages. Younger kids all the way to high school kids as well.

CKN: What was a challenging team you’ve faced?

Angela: With the Boston Breakers, we played the first-place team in the league, the LA Sol and we actually beat them the first time we played them. For the US National team, a challenging team was Brazil. We played them in the Olympic finals and beat them for first place and the gold medal.

CKN: What places have you been to play soccer?

CKN: Did you play soccer when you were a kid?

Angela: I did. I started playing soccer when I was 7 years old. That was a long time ago.

CKN: What was your favorite country to play in?

Angela: Probably Portugal or Costa Rica, I would say.

CKN: Have you ever lost?

Angela: Yes. I have.

CKN: How many goals have you scored?

CKN: Have you ever played in Gillette Stadium?

CKN: How many people are on your team?

Angela: We have about 25 players on the team, including me.

CKN: What’s your favorite type of animal and color?

Angela: My favorite animal, hmmmm, maybe a dog or a turtle. And I love the color red.

CKN: What’s your record of how many goals you’ve scored?

Angela: Oh, I’m not sure exactly, but it’s a few hundred out of all the years I’ve played soccer.

CKN: How many goals have you scored since you’ve started playing soccer?

CKN: How long have you been on the Boston Breakers?

Angela: In this league — it’s called the WPS, Women’s Professional Soccer — we’ve just started our first season this year in April. But I was also on the Boston Breakers, formerly in a different league called the WUSA from 2001 to 2003. So I’ve been lucky enough to play on the Breakers two times.

CKN: How many medals do you have?

CKN: How many years have you played soccer?

CKN: How many games do you have a week?

Angela: We typically have one game a week, but the next two weeks we’re going to have two games a week. We’re going to play Sunday and Wednesdays.

CKN: Who’s your best friend on the team?

Angela: I actually have a few friends on the team because I’ve know them for a long time so. Kristine Lilly, have you guys ever heard of Kristine Lilly? She’s actually played on the national team for many years, and also on the Boston Breakers as well.

CKN: How many people are in the crowd?

CKN: Do you have any advice for the three kids here with a game tomorrow?

Angela: I guess the advice I’d give is to work hard and concentrate on something that you are doing well and keep doing it, and have fun with it. Whenever I’m having fun, I play my best soccer.

CKN: What teams have you played for?

Angela: I’m on the Boston Breakers, and the US team, and then I played in college as well at the University of Virginia.

CKN: How many trophies do you have?

CKN: Have you ever been on a commercial?

CKN: Do you have any brothers and sisters?

Angela: I have one younger brother.

CKN: Who is your idol?

Angela: I tended to look up to the women’s national team, because I loved watching them play when I was younger. And then I look up to my mom a lot and I still do.

CKN: Who is the most athletic person on your team?

Angela: Amy Rodriguez is very athletic. She’s probably the fastest person on our team, or in the league.

CKN: Where were you born?

CKN: What is the capital of that state?

CKN: Who is your best friend on the team?

Angela: I have a few friends. I like all the people on my team. We’re all pretty good friends.

CKN: How often do you have to practice?

Angela: Every day. I practice pretty much every day all year round. Yeah, it’s a full-time job.

CKN: Have you ever been traded?

Angela: That’s a good question. I actually have only played for the Boston Breakers, but there’s also the possibility of being traded. Sometimes players are traded when you play professionally.

CKN: What specific commercials have you been on?

Angela: I’ve been in a couple commercials for the league and also for US team. They have different sponsorships, or to promote the league.

CKN: What was the name of the first team you were on when you were 7?

Angela: The first team I played for was called the Tan Stingers. I still remember that. [Laughs]

CKN: What year were you born?

CKN: What college did you go to?

Angela: The University of Virginia.

CKN: Do you like playing for the Boston Breakers or the US team better?

Angela: Actually I like playing for both. They’re two very different teams. It’s nice to be able to play for the Boston Breakers where I get to play against some of my US teammates and also against a lot of international players as well. So two different teams is both fun.

CKN: What’s your plan for the future?

Angela: Well that’s a tough question. For right now I want to keep playing soccer while I can while my body still lets me. And then I guess I’ll look into doing something else. I really like real estate so maybe something with real estate.

CKN: Do you have any kids?

Angela: No. I do not have any children.

CKN: When you’re not playing soccer, do you play any other sports?

Angela: When I’m not playing soccer, I typically am not playing a whole lot of other sports because soccer is my job and I’m very active doing that I tend to not do too many other active things. I kind of take more of a rest.

CKN: Are you going to play soccer forever?

Angela: I can tell you that I’m not going to play soccer forever. [Laughs]

CKN: Who’s your best friend, but it doesn’t have to be on your soccer team

Angela: One of my really good friends is a soccer player but she plays for another team. She also plays for the Canadian national team. She’s a goalkeeper so I like to try and score goals against her, even though she’s my friend.

CKN: Have you ever gotten hurt?

Angela: I have gotten injured. I have had shin injuries, stress fractures of my shins before. That wasn’t fun.

CKN: Did you have crutches or a wheelchair?

Angela: I had a big boot that I put on my leg.

CKN: Who’s your favorite soccer play in the world?

Angela: There are a lot of great soccer players out there. I really like Ronaldo. Have you ever heard of Ronaldo, Brazilian player, he’s pretty good.

CKN: Have you ever met Mia Hamm?

Angela: I have. I’ve played with her.

CKN: I saw on your website that there’s a program that you sponsor, “Savings Makes Cents” Can you tell me about that please?

Angela: Sure. I work with the Massachusetts state treasurers department with a program called “Savings Makes Cents”. So I go all across the state with a lot of different schools and talk with a lot of different schools and the children of the schools about the importance of saving money and money management, things like that. It’s something that I’ve been working with the state for a few years now. It’s a fun program. And I encourage people of your age to start saving money maybe set up a savings account, things like that.

CKN: Is soccer your favorite sport?

Angela: Soccer’s definitely my favorite sport, for sure.

Angela: I’m going to have to say…. Arsenal. They’re in the English Premiere League.