Part of being a fifth-grader 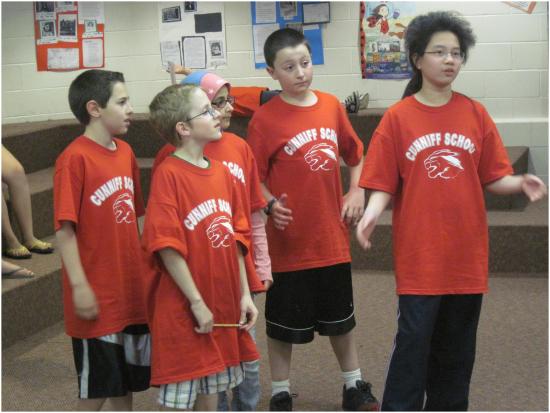 The cast of "Anton and Grace Hopper" rehearses in the Cunniff library. The play will be performed June 11, 2010.

“Give the giants back their land, free the elves!”

The Cunniff School fifth-graders put on different plays each year. This year’s plays will be performed Friday, June 11, in the cafetorium.

The rehearsals – which are 100 percent after school – take place in the cafetorium and the library. To keep their energy up, the students have Oreos before they start. Then they do a little stretching with their directors, Lee and Shayna. These exercises include swinging up and down, twisting, and foot wiggling. Next, they split up to work on their separate plays.

The parts were chosen randomly, but the kids got to choose about how many lines they got. They could choose a small, medium, or high amount of lines.

The fifth-grade plays will be performed twice on Friday, June 11, once during school (1 p.m.) and once after school (3 p.m.). See you there!