In on the bottom floor 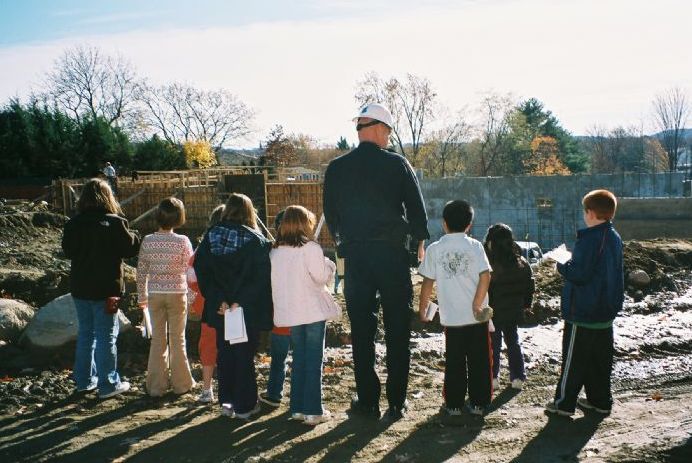 The site is on Main Street, next to the historic Browne House, which was built in 1698. The Watertown Police Department will move in to the new building in the spring of 2010.

The current police station was built in the 1930s and is too small, said Officer Lloyd Burke.

“I’m very, very excited,” he said. “Right now, I have to share my office with two other people and it’s cramped.”

He says that the new station will be approximately 40,000 square feet, which is four times bigger.

When Burke is on the site, he stays safe by wearing a hardhat, which is harder and stronger than a bike helmet. He takes pictures of the site every day, he said, “so we have a historical record of what it looked like.” He puts them on a police department website, which also has pictures of the demolition and drawings of what the new station will look like when it is done.

The site was where the Browne School and playground used to be. It is now so muddy, people can lose their shoes.

Trucks are always going in and out of the site. There are construction machines, like a front-end loader, parked near the big hole. There are trees wrapped with pink ribbons, which means they will be saved. Next to the trees is a big steel box used by workers digging a trench that helps keep the trench from collapsing on them. On the edge of the hole is a laser level. Inside the hole are cement walls with rebar and wooden forms for more walls. But it is so surprisingly quiet on the site, you could read there.

The baseball field behind the site will not be touched. The only other thing not knocked down was the flag pole, but it is surrounded by piles of dirt and rocks. The piles are not as tall as the flagpole, but they are much bigger than the white construction trailer by the street.

The piles came from the hole. The rocks were sifted out of the dirt. A lot of the dirt will be filled in around the foundation. Some of the rocks will be will be trucked away and some will be sold for big money to people who want to use them for stone walls.

Some parts of the school were saved. The sandstone blocks that read “Browne School” and some transoms from over the doors will be put in the new station. The new station will be twice as big. It will have a community room on the first floor and a shooting range in the basement.

There is a truck now in the basement where the changing room will be. The truck uses a ramp made out of dirt used to get in and out of the hole.

The walls are made by pouring concrete over rebar (short for “reinforcing bar”), which is made of steel and help the concrete stay together so it won’t crack.

One of the people putting the rebar together is Mike. He is an ironworker from Boston Local 7. He lives in Millbury, which is near Worcester, and has to travel to Watertown Monday through Friday. He works from 7 a.m. to 3 p.m. each day, unless he has to stay longer because they are pouring concrete.

Mike wears his tools — wire and pliers — on his belt.

“These are the only tools I need to do my job,” he said.

He was working on the foundation, which, he said, is the most important part of the building.

“Without a solid foundation, you might have problems later on,’’ he said.
When work first began at the site, protesters came with a large inflatable rat. They were mad, said Burke, because the workers doing the demolition were from New Hampshire.